PowerCLI was around for years. At the beginning VMware used name vSphere PowerCLI but over the years more and more modules ware added to support not only vSphere but other products. So, with this release the name changed to VMware PowerCLI.

PowerCLI is a strong automation tool allowing you to manage your vSphere environment with CLI based commands and powerful scripts. Sometimes it is more flexible to write a quick script to do some repetitive work then do such thing in GUI all the time. It also reduces manual errors, because once the script is done it will always do the same and you can’t forget some important step in the configuration.

I am using OSX for my daily work and it was a bit struggle there. In the past I had to use Windows-based machine as a jump server with PowerCLI installed, because there was no support for OSX at all (well, it was possible to install PowerCLI, but the function was quite limited). Not anymore! With PowerCLI 10 OSX is fully supported as well.

Today, we release PowerCLI 10.0.0. This release adds support for PowerShell Core 6 which can be run on Linux and Mac OS systems. There are also a handful of VMGuest related cmdlets which have been removed from the release. Their functionality can be replaced with the usage of Invoke-VMScript. Lastly, there have been several corrections. Many of which are thanks to our amazing community for bringing them to our attention.

Let’s have a look at the list of available modules

How to install PowerCLI 10

As said, Power CLI is multiplatform, so you can install on Windows, Linux or OSX which makes it much more useful than in the past.

The easiest way to install is directly from PowerShell itself

After the installation is done we can check the modules 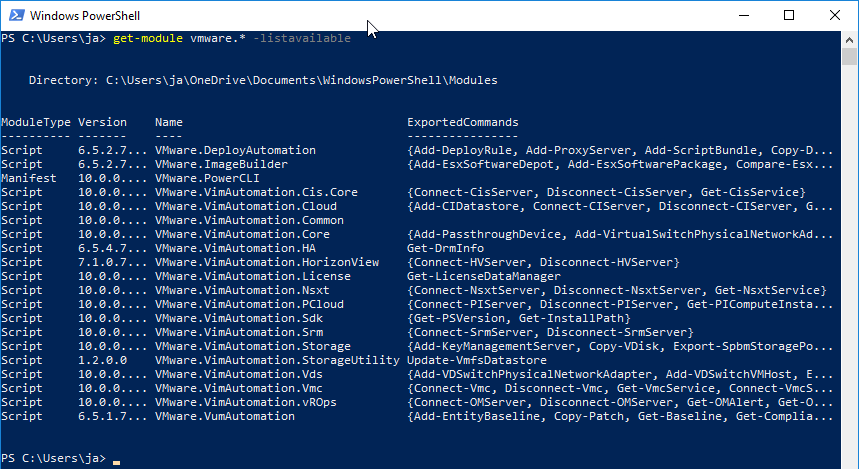 And that’s it…well, almost. Microsoft recently changed the behavior how the certificate handling is done so if you use self-signed certificates you won’t be able to connect to your ESXi server. But there is a quick fix

Also, do not dorget to change execution policy if you won’t to run you existing scripts

If you are running OSX you can have a look at the video where I have performed the fresh install as well. The approach is similar to Windows but there are few prerequisites like Homebrew or CASK that needs to be installed first.